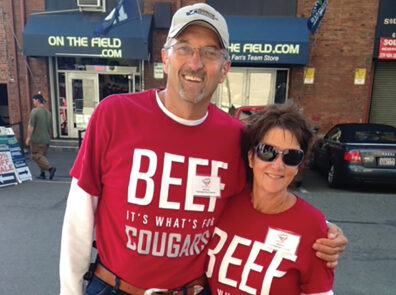 Ed Field’s broad background, connections, and commitment to the beef cattle industry make him a powerful advocate for those in the industry in the state of Washington. He used these affiliations and his expertise to inform the public and the legislature about the Washington cattle industry. Field has worked hard to educate legislators and to provide and protect the cattle producer’s perspective in establishing fair and science-based environmental regulations for feedlots. In recognition of Field’s many accomplishments, the Department of Animal Sciences honored him with the 2021 Distinguished Service award.

Field’s first experiences in the cattle industry were on a cow-calf operation in Colorado where he lived with his parents and siblings for nine years. In 1957, they moved north to the Columbia Basin in Washington and purchased a 160-acre ranch in Quincy. Here, they farmed and backgrounded calves, feeding them from weaning until they were ready for finishing at a feedlot.

After graduating from Central Washington University in 1970 with a degree in business and finance, Field moved to Seattle and worked for an insurance company. In 1976, he moved back to the farm when his dad expanded the cattle business to a 5,000-head capacity feedyard. Field spent the next 11 years working at the family operation, farming hay and grain, and backgrounding calves in the feedyard. In 1987, Field was hired by Don Schaake to manage his feedyard in Quincy.

Ready for something new in 2005, Field retired from feedlot management and applied to the Washington Cattle Feeders Association for the position of Executive Director. Field had been a member of the WCFA board of directors for 25 years and was president from 2000 to 2002. The WCFA was looking for someone with a strong background in the cattle industry to represent them at the national, state, and local level. Field was exactly who the WCFA was looking for!

Cattle feedlots are heavily regulated and must comply with air and water quality standards defined by the state and federal regulatory agencies like the Washington Department of Ecology and the U.S. Environmental Protection Agency. For 11 years as the WCFA Executive Director, Field worked tirelessly to build a strong working relationship with regulatory agencies and lobbied for the interests of cattle feedlots, particularly those related to environmental issues. He pushed for amendments to the law regulating cattle water and fugitive dust from cattle feedyards and collaborated with the DOE to develop best management practices to minimize dust production. His efforts have saved the industry from costly regulations.

While Executive Director of the WCFA, Ed was a strong supporter of WSU beef activities in the department. He is proud of his involvement in the Beef 300 short course, a hands-on workshop for beef cattle producers, feeders, and marketers to help them make informed decisions to improve profitability, competitiveness, and wholesomeness of beef products. The short course was designed and offered by WSU and the University of Idaho Extension, WSU Department of Animal Sciences, Washington Cattlemen’s Association, WCFA, and the Washington Beef Commission. He and the WCFA also enjoyed interacting with WSU students in Cougar Cattle Feeders and supported the efforts and activities of this next generation of cattle feeders and industry leaders.

Although officially retired from the cattle business, Field stays in contact with many past and present cattlemen and women because he says the cattle industry has some of the best people in the world.

These days, Ed spends his time playing golf, traveling, and working with his local museum, Rotary club, and food bank. He and his wife, Kit have been married for 51 years. They have three children and seven grandchildren.