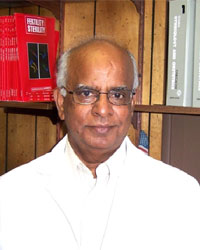 C.V. Rao is one of the world’s leading experts in LH/hCG actions in non-gonadal tissues in the body. More than 36 years of his research has led to wide spread recognition of the actions of these hormones in health and disease and to potentially novel therapeutic uses of hCG in reproductive medicine, infectious and autoimmune diseases, cancers, etc. He has extensively lectured on these research developments at various universities and national/international scientific meetings in the U.S. and throughout the world. He has published more than 240 peer-reviewed journal articles, 350 abstracts and 36 book chapters. His research has almost been continuously funded (>$5 million) for more than 30 years, mostly by NIH. He has taught and trained more than 100 post doctoral and clinical fellows, residents and students. He serves as an editorial board member for numerous scientific journals. He has been an organizing committee member of numerous national and international scientific meetings. Dr. Rao received his MS degree with Dr. M.H. Ehlers in 1967 and his Ph.D. with Dr. V.L. Estergreen in 1969 with a minor in Biochemistry. He was a member of Human Embryology and Development 1 Study Section at National Institutes of Health from 1998 to 2002. Before joining Florida International University College of Medicine in July 2008, Dr. Rao held the positions of Professor of Obstetrics, Gynecology and Women’s Health, Professor of Biochemistry and Molecular Biology and Director of Division of Research in the Department of Obstetrics, Gynecology and Women’s Health at the University of Louisville School of Medicine. He was also a Distinguished University Scholar. He joined University of Louisville in 1972 and rose through the ranks to become full Professor with tenure in 1979.