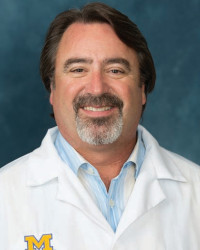 Dr. Gary D. Smith graduated from WSU in 1993 with a PhD in Animal Sciences. The research he conducted for his MS degree in animal science at Oregon State University and his doctoral work in Dr. Jerry J. Reeves’ lab at WSU helped launch an exemplary career in reproductive sciences. After leaving WSU, he worked for the next three years as a postdoctoral fellow at the Oregon Regional Primate Research Center at Oregon Health Sciences University in Beaverton, Oregon. In 1995, Smith began working at the Department of Obstetrics and Gynecology at the University of Chicago before joining the Departments of Obstetrics and Gynecology and Physiology at the University of Michigan (UM) in 1998.

Smith is currently a professor of obstetrics & gynecology, physiology, and urology at the UM Medical School where he has built a prolific and renowned research program focusing on oocyte development, assisted reproductive technologies for men and women, and microenvironment effects on proliferation and differentiation of human embryonic stem cells. Previously funded grants provided more than $17 million in support of his research program and his current and pending grant applications add about $15 million to the total. He has authored more than 100 journal articles, 21 book chapters, and 138 abstracts and mentored 54 students and scholars.

Dr. Smith is the Director and a co-founder of the MStem Cell Laboratories at the UM, making it the preeminent academic institution in the U.S. deriving disease-specific human embryonic stem cells that are accepted in the NIH Stem Cell Registry. Smith played an instrumental role in drafting a proposal to amend the state’s constitution reducing restrictions on embryonic stem cell research. Michigan voters passed the proposal in 2008 and the lab has since produced disease-specific human embryonic stem cell lines with the genetic mutations that cause Huntington’s disease, familial hypertrophic cardiomyopathy, adrenoleukodystrophy, fragile X syndrome, and spinocerebellar ataxia. The derivation of these and other unique stem cells will hasten understanding of the causes of human diseases and lead to discovery of innovative therapies and cures.