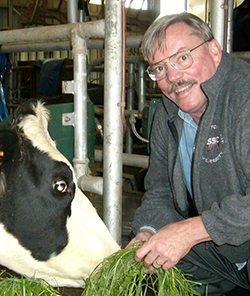 His early work with Dale Bauman helped identify the key controls and pathways of milk synthesis which led to the development of recombinantly derived bovine somatotropin.  In the doctoral work he identified some key controls of obesity in rat and pig models of human metabolism and then returned to dairy animal biochemistry.  His work at WSU has identified the key metabolic pathways that define a successful adaptation and maintenance of lactation.  These studies determined the roles of genetic and nutritional control of adipose metabolism.

In addition to the work on dairy cattle, he realized the tremendous interest in companion animals and that pets were not only economically important, but a key part of human development and behavior. Thus, he started one of the first senior level Companion Animal Courses.  He also started a general introductory course on pet nutrition and his successful text, Principles of Companion Animal Nutrition has been used across the country and some other countries and is now in a new (3rd) edition.

In recognition of his scientific and educational work, Dr. McNamara earned the1990 WSU College of Agriculture Young Scientist Award, the 1992 ADSA Young Scientist Award, the 2001 Washington Science Teachers Association Higher Education Teacher of the Year; the 2007 Corbin Award in Companion Animal Biology (Dr. Corbin was one of his teachers at UI in the 70’s); The College of Agricultural, Human and Natural Resources Excellence in Advising Award (2005); and received the first WSU Excellence in Advising Award (2016).  He was elected to the WSU President’s Teaching Academy in 2007.  He was elected as a Fellow of ADSA in 2012; earned the 2015 Zoetis Animal Physiology Award and was elected a Fellow of ASAS in 2016. He is one of only 11 people who are  Fellows of both ADSA and ASAS.