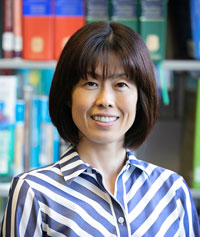 The primary goal of my current research is to discover and understand the cellular, molecular and epigenetic mechanisms of gynecological diseases and reproductive functions influenced by environmental toxicants, as well as to develop novel therapeutic strategies that are more effective than those currently employed by the medical community.

Endometriosis: Endometriosis is a common gynecological disorder, which causes debilitating chronic pelvic pain and subfertility in women of reproductive age. Because it is an estrogen-dependent disorder, hormonal therapies are available for the medical treatment of endometriosis including oral contraceptives, GnRH-agonists and progestins in order to inhibit estrogen production and function. However, these hormonal treatments along with laparoscopic surgery are often of limited efficacy with high recurrence rates, frequent side effects, additional costs, and potential morbidity. Thus, a critical need exists to develop new and effective therapies for endometriosis targeting biologically important mechanisms that underlie pathophysiology of this disease. We are currently developing new therapies for endometriosis patients. Specifically, we are investigating whether niclosamide could be a new innovative therapy to improve health outcomes of patients with endometriosis through inhibition of inflammatory mechanisms.

Reproductive Toxicology: Following extensive work examining the adverse effects of bisphenol A (BPA) as an endocrine-disrupting chemical, the usage of BPA has been restricted and/or banned in certain products such as baby bottles and sippy cups in Canada, the European Union and the US. As the result of restrictions on the use of BPA, a structurally similar analogue, BPS has become one of the major substitutes for BPA. BPS is found in numerous daily consumer products including toys, baby bottles, personal care products, canned foods and paper products. Furthermore, BPS is the main analogue used to replace BPA in thermal papers. BPS levels in water, sediment, sludge and indoor dust have been continuously increasing and have already reached comparable or equal levels of BPA. BPS is detected in human urine, and its levels have been increasing in the US and are already higher than those of BPA in some other countries. However, it is still unclear how much of our toxicological understanding of BPA is also applicable to BPS. We focus on transgenerational effects of BPS on male and female germ cell development and reproductive functions.

Ovarian Cancer: Ovarian cancer is the most lethal gynecological malignancy. The high mortality related to ovarian cancer is primarily due to the advanced stage of the disease at presentation and the inherent limitations of current therapeutic options. The majority of patients, who initially respond well to chemotherapy, eventually recur and die from chemoresistant disease. Therefore, a critical need exists to characterize therapeutic mechanisms and develop new effective therapies(s), ultimately leading to better treatment plans that will give patients the chance for improvements in overall survival. We have built on our finding that WNT/β-catenin signaling is one of the key mechanisms of ovarian cancer development which can be targeted by niclosamide treatment. Now, we are expanding the studies on niclosamide’s direct binding targets, RNA binding proteins and their oncogenic activities, as well as their regulatory mechanisms and target mRNAs in ovarian cancer.