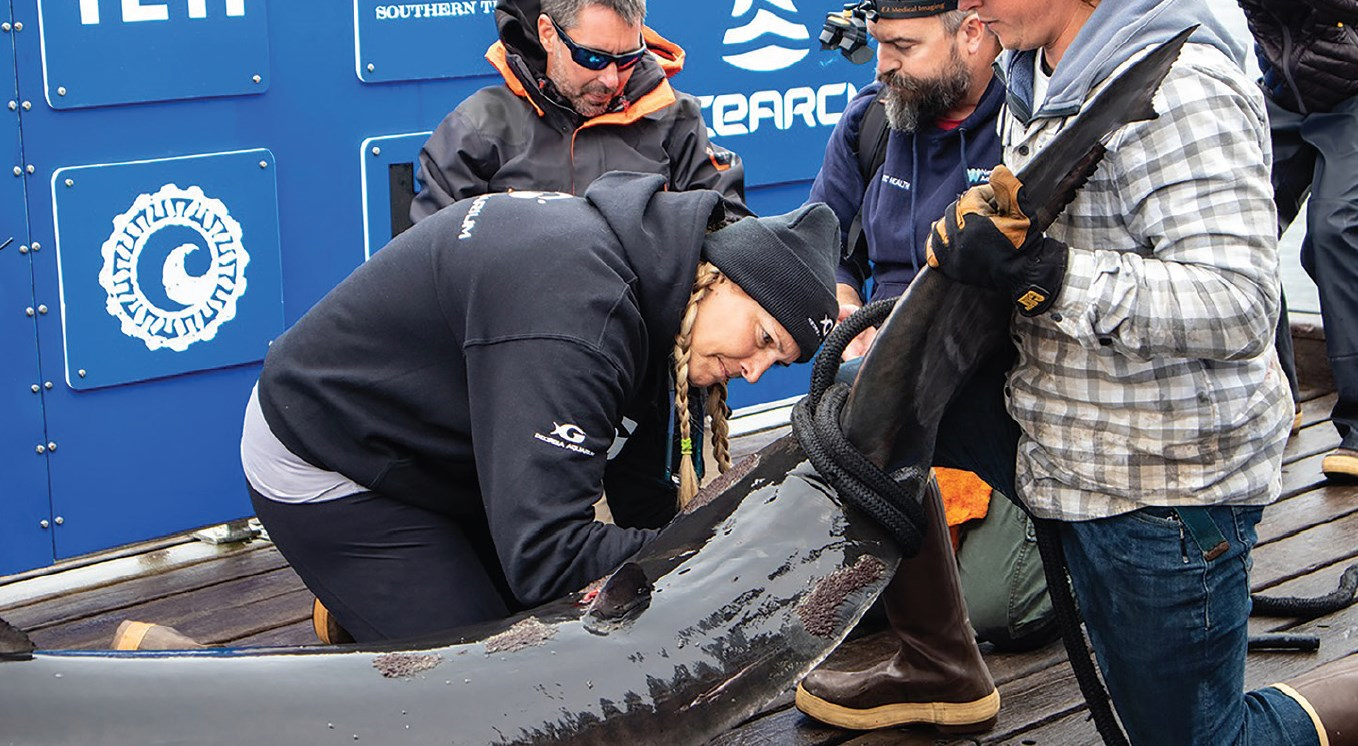 How do we know what elasmobranchs eat? Figuring out the nutritional requirements of cartilaginous fishes like sharks and rays and what they prefer to eat in the wild is not as easy a task as it is with terrestrial livestock species.

Dr. Lisa Hoopes, Director of Research, Conservation, and Nutrition at Georgia Aquarium in Atlanta has spent her career working to understand aquatic animal nutrition. Hoopes received her PhD from Texas A&M University and completed a two-year postdoctoral fellowship through the University of Florida and with Disney’s Animal Kingdom before she joined Georgia Aquarium.

On February 17, 2021, in a virtual, Covid-compliant seminar, Hoopes presented “Nutrition & Feeding Ecology of Sharks and Rays,” at the Halver Lecture in Comparative Nutrition, an ongoing series funded by the late Dr. John E. Halver, III (1922 – 2012), a WSU alumnus who was fervent about introducing undergraduate students to the field of comparative animal nutrition. He is known as the “Father of Fish Nutrition” because of his nutrition research with salmon that established the basis of commercialized fish feed.

“Nutrition is the cornerstone of good health,” said Hoopes to the 90+ students, staff, and faculty at the Zoom lecture. “We consider it preventative medicine, especially in zoos and aquariums.”

Hoopes uses a comparative nutrition approach to form the basis of diet formulation for aquatic species, using nutrient guidelines established from well-studied species such as salmon, as described by Dr. Halver, to make informed decisions when formulating diets for other species such as sharks and stingrays. While this is a good first step in proper nutrition, it does not predict what these species eat in the wild to meet their nutrient requirements.

To close the knowledge gap and refine diet formulation, Hoopes uses a cutting- edge scientific technique called DNA metabarcoding, an immensely powerful, minimally invasive tool to uncover clues that she uses to reconstruct diets of aquatic vertebrates. She isolates prey DNA from fecal material collected on cotton swabs from inside a shark’s cloaca. A small section of DNA is amplified with the polymerase chain reaction and sequenced using nextgeneration sequencing methodology. After sequencing data is processed, the small sections of prey DNA are identified by matching them to a database of barcode fragments.

Hoopes also employs biochemical tracer methods based on the “you are what you eat” principle to study feeding ecology of aquatic animals. In general, tissues of a consumer reflect what they have eaten, and this concept is conserved up the food chain and can be investigated with stable isotope ratios and fatty acid profiles.

The isotopic ratios of relatively rare heavy isotopes like 13C and 15N in relation to the more common lighter isotopes help to determine what trophic position in the food web an animal occupies and its habitat usage. Fatty acids profiles in fish tissue are largely based on the lipids of prey consumed and can be used as biomarkers representing food source. Together, these biochemical methods indicate an animal’s feeding ecology.

Dr. Hoopes grew up in Michigan and always knew she wanted a career working with animals. She said films and documentaries describing underwater research by Jacques Cousteau, a French oceanographer, and Sylvia Earle, an American marine biologist, inspired her curiosity of the ocean and its inhabitants. She said that key to her success in the industry was her willingness to get out there and get experience.

Dr. Hoopes encouraged and advised enthused students, and anyone interested in a career at an aquarium, to “Volunteer! We select most of our hires at Georgia Aquarium from our volunteer pool – folks that have a proven track record. Also, many zoos and aquariums have internships across many different departments. Apply to those!”