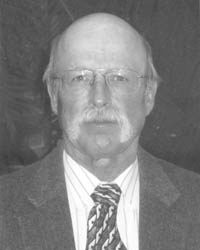 Gary Moss received the BS and MS degrees in Animal Science from Montana State University. In 1972, he was employed as a research technologist at Washington State University and received a PhD in 1978 under the tutelage of Dr. Liné Estergreen studying the source of unique progesterone metabolites in pregnant mares.

Following postdoctoral studies with Dr. Terry Nett at Colorado State University, Gary joined the faculty at Purdue University. In 1985, Gary moved to the University of Wyoming and was promoted to full professor in 1994. Gary has received approximately $1.7 million in grants, contracts, and collaborative support and is an author on 96 refereed manuscripts, 40 proceedings papers, and 113 scientific abstracts. Most of those studies focused on causes of anestrus, determination of signals that mediate nutritional effects on reproduction, and methods to improve reproduction in cattle and sheep. Gary has mentored two postdoctoral students and 17 graduate students who now occupy diverse positions including university faculty and administrators, veterinarians, Extension educators, industry personnel, physician’s assistant, a rancher, and a game warden. He also served as a committee member for 35 students. Gary has taught a Management of Reproduction course during spring semesters since 1985 and is especially proud of his “sprinkling” of successful students throughout Wyoming and neighboring states. He was honored by being the recipient of the University of Wyoming College of Agriculture Outstanding Advisor Award in 2002. Gary also served as the advisor for the University’s Most Outstanding Master’s Thesis in 2002. During his career Gary has served on numerous departmental, college, university, and professional society committees including a term as division editor for the Journal of Animal Science and president of the Western Section of the American Society of Animal Science.