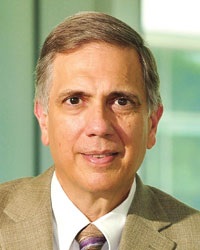 James Dias received a B.S. in Biology (1975) from Gonzaga University. Dr. Jerry Reeves mentored his M.S. (1997) and Ph.D. (1979) degrees in Animal Sciences/ Reproductive Physiology at WSU. Then, Jim received an NIH National Research Service Award to study protein purification with Leo Reichert. His postdoctoral studies led to stabilization of the gonadotropin recep­tor in detergent solution. This ultimately enabled the purification of the LH receptor and led to the cloning of the first full-length gonadotropin receptor.

Jim was appointed Assistant Professor in the Department of Biochemistry at the Al­bany Medical College in 1982 and as Asso­ciate Professor in 1986–he received an NIH Research Career Development Award. He developed monoclonal antibodies against FSH as probes to map the surface accessi­bility of the hormone.

In 1988 Dr. Dias was recruited to the Wad­sworth Center, New York State Department of Health as a Research Scientist and Associate Professor of Biomedical Sciences. There he applied molecular biology meth­ods to perform site-directed mutagenesis of FSH. His lab used protein expression and purification methods to purify FSH and collaborated with a Wadsworth Center colleague to crystallize and determine the three dimensional structure of fully glyco­sylated FSH. This achievement established the Dias lab as a leader in the gonadotropin field, particularly on the topic of FSH struc­ture and function.

Jim was Scientific Director of the Wad­sworth Center Scientific Core Facilities for nine years then became chair of the Bio­medical Sciences Department at the Uni­versity of Albany’s School of Public Health (2002 -2009), in which he retains an aca­demic appointment as a Full Professor. Jim currently serves as Vice President for Re­search (2009) of the University of Albany. Over the course of his career, he has men­tored nineteen trainees and a host of under­graduate students.

Jim’s lifelong goal has been to exploit knowledge of FSH and its receptor to im­prove gonadotropin therapy and conversely to develop a non-steroidal contraceptive. Recent discoveries in his lab disrupt the current dogma of how gonadotropin re­ceptors signal and may lead to therapy for estrogen-dependent breast cancer and en­dometriosis. His work has been published in over 100 research articles.

This award is given to Jim in recognition of his achievements in the field of reproduc­tive physiology that have been aimed at the societal good of treating infertility and de­veloping safer contraceptive methods.