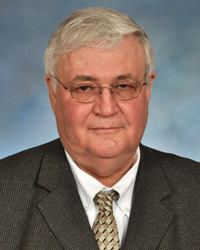 Dr. James Kinder received his B.S. degree in Agriculture from the University of Missouri-Columbia, M.S. from the University of Nebraska-Lincoln, and Ph.D. from Washington State University-Pullman under the direction of Dr. Jerry Reeves in the area of neuroendocrinology. He joined the faculty at The Ohio State University in 1975 in a primary teaching role, and then moved to the University of Nebraska in 1979 where he was on the faculty for 20 plus years in the Department of Animal Science, and led a strong graduate education program in reproductive endocrinology. Simultaneously, Jim served as Associate Director of the University-wide Center for Biotechnology for 10 years. During his research career, Dr. Kinder published > 160 full-length (peer-reviewed) research papers, generated > $2 million dollars in research grant support and was instrumental in the success of at least 36 graduate student degrees. In 1998, the American Association of Animal Science presented Jim the Animal Physiology and Endocrinology award for his research efforts. In 1999, Dr. Kinder returned to The Ohio State University as the Chair of the Department of Animal Sciences and more recently as Interim Chair of Human Nutrition, where he is responsible for facilitating development of a common vision and path for the future of the Departments and providing direction through changes and challenges encountered. Through his leadership, the Department of Animal Sciences has seen a diversification of faculty, research and curriculum to meet changing needs in agriculture and students and emergence of new areas of focus, such as biomass to energy and animal welfare, while maintaining and enhancing the traditional food animal production focus on which the Department was established. For his career administrative impacts to the field of animal agriculture, in 2008, the American Association of Animal Science made Jim an ASAS Fellow in the administration category. Dr. Kinder’s breadth of experience and excellence in research, teaching and extension has been nationally and internationally recognized.