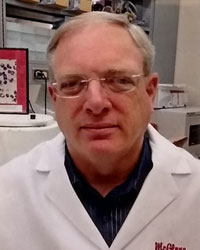 Dr. John McGlone earned BS (1977) and MS (1979) degrees in Animal Sciences from WSU and a PhD in Animal Science with an emphasis in Ethology and Neuroscience from the University of Illinois. His research focuses on animal welfare, ranging from housing and production systems for pigs to under-standing neuroendocrine and immune mechanisms underlying stress.

His first faculty appointment began at the University of Wyoming where he was the first animal scientist to receive a Harry Frank Guggenheim Research Fellowship Award for his studies of pig behavior and physiology. Dr. McGlone moved to Texas Tech University (TTU) Department of Animal and Food Science where he has made significant international contributions to animal welfare, received over millions of dollars in research support and developed four companies to address animal welfare needs in livestock production. His patents include the use of growth hormones to stimulate litter size and image analysis to estimate pig body weight. Two pheromones, from additional patents, are currently sold in pet stores. His contributions to the swine industry have led to group housing systems for sows, improvements in swine transport and reduction of stress.

At TTU he serves as the Director of Animal Care Services, Director of the Institute for Comparative and Experimental Medicine and is the Institutional Official for Animal Care and Use. He is also Chair of the FASS Scientific Advisory Committee for Animal Care, whose mission is to provide guidance to scientists who conduct science-based animal activities. He was co-editor of the lat-est version of the Guide for the Care and Use of Agricultural Animals in Research and Teaching (AG Guide), which is used by the USDA, AAAALAC, universities, and research institutions worldwide.

Dr. McGlone was the first animal scientist to serve on the Council of Accreditation for AAALAC International, and was appointed to a National Academy of Sciences panel on animal transport. In 2015, he received the Humane Award from the AVMA, the AAALAC Bennet J. Cohen Award, AAALAC’s highest award, and the FASS Service Award for his work on the AG Guide.

Throughout his career, Dr. McGlone has taught many courses in Animal Science and has mentored many graduate students and numerous undergraduate researchers. Students appreciate his “concern for the learning of each individual student.” Outside of his professional responsibilities, Dr. McGlone is involved in many philanthropic activities in the U.S. and worldwide. He has two grown daughters and two grandsons.