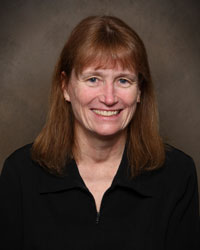 Dr. Sandy Davidge received her B.S. degree in Animal Sciences from the University of Massachusetts in 1983, and her M.S. degree in Animal Sciences from Washington State University in 1985 under the direction of Dr. Jan Wiebold. After her M.S. degree, Sandy worked as a technician with Dr. Jerry Reeves before moving to Colorado in 1986 to work as a technician with Dr. Terry Nett at Colorado State University. Sandy then pursued further graduate training and received her PhD in Animal Sciences from the University of Vermont in 1993 under the supervision of Dr. Margaret McLaughlin and continued her training as a postdoctoral fellow with Dr. Jim Roberts at the Magee Women’s Research Institute in Pittsburgh. Dr. Davidge then moved to Edmonton, Alberta Canada in 1996 where she is currently Professor and Director of the Women and Children’s Health Research Institute at the University of Alberta. She is also the Research Lead for the School of Human Development within the Faculty of Medicine and Dentistry.

Dr. Davidge holds a Tier 1 Canada Research Chair in Women’s Cardiovascular Health and is a Scientist of the Alberta Heritage Foundation for Medical Research. Sandy’s research program is focused on women’s cardiovascular and reproductive health. She has published over 150 peer-reviewed manuscripts and review articles. Over the past 5 years, Sandy has received more than 5 million dollars in grant support. Sandy’s research has been recognized for Excellence in Research with the Martha Cook Piper Award at the University of Alberta (2002) and the President’s Scientific Achievement Award from the International Society of Gynecologic Investigation (2003). In 2008, she was the recipient of the Faculty of Medicine and Dentistry Mentoring Award. Most recently, Sandy was awarded a Professional and Academic Leadership Award from the College of Agricultural, Human and Natural Resource Sciences at Washington State University (2011).