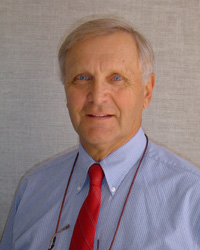 Steven Aust received a BS degree in Agriculture from Washington State University (WSU) in 1960, and intended to return to the family farm in Pacific County until introduced to research by Dr. Tim Blosser. As such, Steven obtained a MS degree from WSU in 1962, with Dr. Tim Blosser serving as Steven’s graduate mentor. After obtaining his Ph.D. in Dairy Science from the University of Illinois in 1965, Steven was a postdoctoral scholar in Toxicology at the Karolinska Institute in Stockholm, Sweden. He then became a Biochemistry faculty member at Michigan State University. After a sabbatical at the Ruakura Agricultural Experiment Station in New Zealand, Steven rose through the ranks to become a full professor of Biochemistry in 1977, Associate Director of the Environmental Toxicology Center in 1980, and Director of the Center for the Study of Active Oxygen in Biology and Medicine in 1985. Steven left Michigan to become the Director of the Center of Excellence in Biotechnology, Utah State University in 1987. Presently, Steven is a Professor (Biochemistry/Chemistry) in the Interdepartmental Program of Toxicology, Utah State University, and Founder of Intech One-Eighty Corporation, which is the exclusive licensee of Utah State University for Biodegradation of Environmental Pollutants by White Rot Fungi. Dr. Steven Aust is an internationally recognized expert in a number of fields, including the toxicology of polyhalogenated aromatic hydrocarbons, lipid peroxidation, the role of iron in the deleterious oxidation of biomolecules, and the degradation of lignin and environmental pollutants by white-rot fungi. His main research theme remains elucidation of the influence/importance of free radicals in biology and medicine. To this end, nearly 50 graduate degrees and 16 postdoctoral trainees have received mentoring under Steven’s supervision. Steven’s research has been funded by NIH, NSF, USDA, EPA, the US Army, the US Navy, and by numerous private corporations to over $12 million. Steven has published over 350 total peer-reviewed research articles and invited review articles, conference proceedings, and handbooks. His work is cited some 500 times per year. Dr. Steven Aust is presently a member of six professional societies, serves on the editorial boards of many scientific journals, is the holder of six patents, and has served on grant review panels of NIH, NSF, EPA, DOE, ONR and numerous other granting agencies. Steven and his wife Karen (originally from Farmington, WA) raise and train registered performance quarter horses, and enjoy fly-fishing.