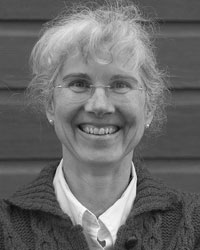 Annie graduated in 1984 with an Animal Science Nutrition degree. She married George King in the fall of 1984 and they returned to the King family farm in Stanwood. Annie briefly worked as a cattle breeder with ABS in the north Snohomish County area while she and George established a Holstein heifer raising operation. Annie and George began crop farming acreage on their own (mostly green peas and vegetable seed) and continued to help George’s parents on the home farm. Tragically, in 1987 George was killed in a tractor roll over. Annie continued farming and increased the heifer operation. She was nominated to continue George’s seat on the Stanwood High School Vocational Committee. In 1989, she married David Lohman (1985 B.S. Agriculture Engineering) and they bought a farm in the Edison area, establishing Lohman Farms, primarily a vegetable seed farm and Holstein heifer operation. In 2000 they sold the heifers and continue crop farming to this day. Annie has been very active in Skagit Valley agriculture, starting with Skagit County Farm Bureau where she served in every officer position including president for 4 years. While serving as president, Skagit County Farm Bureau was awarded the Washington State Farm Bureau’s Presidential Citation for leadership in protecting water and property rights of farmers and ranchers. Also while serving as president, Skagit County Farm Bureau played a key role in land acquisition for the WSU Mount Vernon NW Research & Extension Center. She served on the “kitchen cabinet” committee. She has been especially passionate about the Skagit County Farm Bureau Annual Scholarship for high school seniors and college students frequently promoting and mentoring applicants. She recently passed the torch on that special project. She is a past member of the WSFB Young Farmers and Ranchers Committee and earned, along with her husband, Dave, the Washington State Young Farmers & Ranchers Achievement Award; and won the state Discussion Meet Contest. She placed 7th at American Farm Bureau National Discussion Meet contest in 1998. She currently serves on the Washington State Farm Bureau Board and is the Land Use Committee chair. Annie also was a member of the Skagit County Dairy Women and served as vice president of that organization. She was a founding member of the Skagit Ag Leaders Group and served on the Skagit County Agriculture Advisory Board (advisory to the County Commissioners). She is currently on the Skagit County Planning Commission- one of 2 farmers out of 9 members. She is the 4-H Dairy Superintendent for the Skagit County Fair. She was awarded the Skagitonians to Preserve Farmland Leadership Award in 2005. Annie has been very active in GMA/CAO, drainage and flood control and regulatory issues related to agricultural lands or activities. She has been promoting agriculture via area youth by seizing creative ways to inject agriculture into the classroom. For example her children took agriculture related show-n-tell items for the weekly letter of the week: “R” is for radish seed, B is for balling gun, etc. She and her husband have hosted “Ag 101” on their farm for school kids using various stations around the farm and fun activities to promote and educate about agriculture. They have also given some town kids an opportunity to train and show a dairy heifer at a local youth fair. Outside of agriculture, Annie served on the school board for Immaculate Conception Regional School (ICRS), on the ICRS Finance Committee, and as a fund raising chair. Agriculture and youth are both passions of Annie’s. Both of her children have been involved in dairy and beef 4-H. Her son was active in FFA Ag mechanics and trap shooting and is currently at Walla Walla Community College studying John Deere Technology. Her daughter, a high school junior, is secretary of the Washington State Jr. Holstein Association and Burlington-Edison FFA chapter president and FFA district 1 secretary.