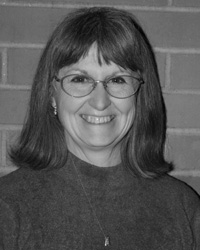 Dianne Halverson Appel graduated from WSU in 1974 with a B.S. degree in Livestock Production (swine & beef emphasis). Right after college she and her husband Steve ran a small cow-calf operation with her father-in-law, but when the operation didn’t break even anymore they sold out. Presently, Dianne and Steve are dry land wheat and barley farmers near Dusty, and Dianne now has a small Suffolk & Icelandic sheep herd. Dianne is a lifetime member of WSU Alumni Association, and one of the original organizers of, and currently is the secretary to, the Friends of Animal Science (alumni) organization (FAS) for the Department of Animal Sciences. She is a lifetime member of FAS, and she hopes to help make the Department of Animal Sciences a stronger and more desirable option for students. Dianne is also a lifetime member of the Future Farmers of America (FFA) and is currently President of the Colfax FFA Alumni group. Because of her own lifetime experiences and skills, Dianne passes these on to FFA students each year. She works with FFA students in their Career Development Events (speaking, livestock showing and sales presentations) at the local level, and has been performing this function for 7 years. Dianne also is a chaperone at State FFA Convention and helps out wherever she is needed, and at all times of the day or night. Dianne is a dynamic fund raiser for the Colfax FFA. She has been in charge of Blueberry sales and has organized the Mini Donut Barn for the Alumni at the Palouse Empire Fair to enable the 4-H & FFA livestock exhibitors, parents and fair goers to have hot donuts, coffee or hot chocolate at 6:30 each morning of the fair and into each evening. Dianne has been involved with the Whitman County Farm Bureau and Washington State Farm Bureau (WSFB) in a variety of capacities for 35 years. At the state level, Dianne serves on the WSFB Women’s Committee. The focus of this group is to educate women in how to communicate their story about the importance of agriculture, in their communities, to classrooms, news media and to their legislators. Dianne helps organize the WSFB live and silent auction each year at their annual convention, in order to raise funds to help pay for conferences and scholarships. This same group provides five $2,000 scholarships each year to college students in some field of agriculture. At the county level, Dianne has been the Whitman County Women’s Chair and then became a County Board Member 15 years ago. Dianne presently serves as the Secretary/Treasurer of the Whitman County Farm Bureau, a position she has held for the last 14 years. She is in charge of organizing the annual meeting and the Palouse Empire Fair booth. Dianne has been a member, and is currently President, of the Dusty BB Club for the last 35 years, which is a community service club, composed of ladies in the area. She is an organist and pianist for the St. Patrick Catholic Parish Men’s Choir in Colfax. She is also a member of the Colfax Thrifty Grandmother’s, a non-profit organization that has a thrift store in Colfax to supply the community with low cost clothing, household and other items that are donated to the shop. “I joined a little over a year ago. One of the first items that came to my attention was that their by-laws needed some work to more meet the needs of the group. I proceeded to work up a new set and present them to the membership for approval. I am one of the younger members and enjoy working with this hard working group to help out those with limited means to acquire things they would like to have. It had been a source for me when we were just getting started farming and wanted to give back to the group for all the help they had given to us.” Dianne judges 4-H demonstrations and has worked with 4-H for over 20 years in one way or another. In her spare time Dianne teaches knitting and crocheting, and has judged at the Palouse Empire Fair in both the 4-H Department and open classes for close to 30 years. She also clerked the Junior Market Stock sale at the Palouse Empire Fair for many years, first as an assistant and then in charge for about 8 years in the 70’s and 80’s. Dianne is a voice for animal agriculture, mentor of youth, role-model for her peers, and a person that “gives back” to those that previously befriended her.