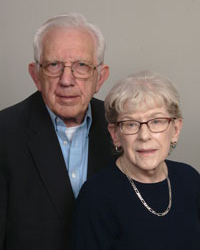 Years after their retirements, the Fries created an endowment to pay it forward. Through their Travel Award, students can travel to professional meetings to present research and foster professional networks. The Fries Research Award was recently added, providing financial resources to students for the conduct of research.

George came to Washington State College from a farm in Winlock, WA. He worked his way through col­lege, primarily as an undergraduate assistant in the College of Agriculture. Experiences and opportunities gained while working in the lab led him to his chosen career path in agricultural research.

George Fries graduated from WSC in 1954 with a B.S. in agriculture. He earned his Master’s degree from the University of Kentucky and a Ph.D. in dairy science from Michigan State University.

George’s career as a research scientist in the U.S. Department of Agriculture spanned almost 40 years. His research initially focused on uptake and fate of persistent pesticides and environmental contaminants in farm animals. He later evaluated plant uptake, soil ingestion and management systems on contaminant levels in milk, meat, and eggs. His work is documented in more than 180 publications and presentations. Producers and regulatory agencies routinely use his work to assess and management health risks.

George met Jean in Bozeman, MT where she was completing a B.S. in nursing. She later earned a M.S. in administration from The Catholic University of America in Washing­ton, D.C. She had a long career in nursing and administration.

George and Jean have lived in the Washington, D.C. area since 1962. They have two adult children—Christopher and Elizabeth.