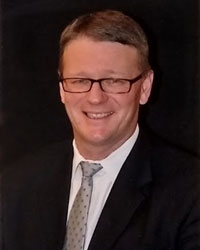 Shortly after graduation, Mike’s distinguished career in the beef industry began on a feedlot in Oklahoma where he acquired leadership skills as a management trainee. Those leadership skills led him to a General Manager position on a 38,000-head feedlot in Colorado, and a few years later, he became the Vice President of Operations for ContiBeef, LLC in Boulder, Colorado. In this role, Mike managed six feedlots that held 450,000 cattle. In 2003, ContiBeef, LLC promoted him to the President & Chief Executive Officer position.

Mike’s success continued as he assumed the President & Chief Executive Officer position at Five Rivers Ranch Cattle Feeding, LLC in 2005. Based in Loveland, Colorado, Mike was responsible for 10 feedlots that held up to 800,000 cattle at any given time. He currently holds the President & Chief Executive Officer position at JBS Five Rivers, LLC in Greeley, Colorado, an enterprise that includes 11 feedlots in the US and one feedlot in Canada. He leads approximately 700 employees that provide care for one 3 million cattle.

Beyond his leadership role at JBS Five Rivers, LLC, Mike leads the beef industry with his forward-thinking approach to beef production. He received Colorado’s Rising Star in Agriculture Award in 2012 and remains active with livestock associations in Colorado and Washington State. Mike has also been progressive in JBS Five River’s involvement in research. One example is a genetic study that included collaborations with WSU and seven other institutions to identify genetic markers for bovine respiratory disease complex (BRDC) resistance in cattle. With access to commercial cattle operations, studies such as these are possible and efforts to identify solutions to reduce BRDC are made feasible.

Mike has been instrumental in moving the beef industry forward through education and research. Throughout his career, Mike’s dedication to cattle well-being and employee development has been apparent. He aims to “build a culture where people are informed and systemic thinkers”. His employees include WSU Department of Animal Sciences graduates who speak highly of Mike’s management style and recruit others to join them.