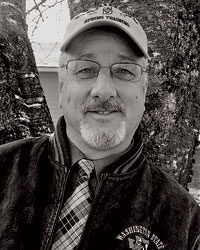 W. Jay Gordon has represented and supported dairy farmers as a lobbyist for the Washington State Dairy Federation (WSDF) since 2001. He served as the Executive Director for 14 years and is currently the Policy Director of the Federation. The WSDF has represented dairy families in Washington on policy and regulatory issues since 1892, making it the oldest active dairy producer trade association in the United States. Washington is home to 410 dairy farmers who employ about 400 people and produce more than $1 billion in dairy products.

Jay has provided continuous support to the Department of Animal Sciences, CAHNRS, and WSU. Recently, he was appointed to the CAHNRS Dean Search Committee. His service also extends to the state of Washington. Jay has served both Governor Gregoire and Governor Inslee as a member of the Chehalis Basin Governor’s Advisory workgroup. This group was formed to address land use management strategies to reduce damages caused by flooding and restore aquatic species habitat in the Chehalis River basin located in Western Washington.

Jay routinely works with state agencies, national dairy organizations, local livestock and shellfish growers to promote the dairy industry while working to provide solutions for environmental and health issues such as nutrient management regulation, air and water regulation and animal identification. He is a member of the board of the Washington Agriculture Legal Foundation, which protects the legal rights of those involved in agriculture and aquaculture, and is on the advisory board for the William D. Ruckelshaus Center, which serves as a neutral resource to solve complex policy challenges for parties in Washington and the Pacific Northwest.

Jay is a steward of the land and understands that in some cases, farmland and ecosystem protection go hand-in-hand. With funding from the American Farmland Trust, the Trumpeter Swan Society, Capitol Land Trust, and the National Parks Foundation for an easement protecting farmland along the Elwha River on the Olympic Peninsula, Jay demonstrated that grazing cows on this land improved the habitat for swans.

Jay and his wife Susan own a seventh generation, 900-acre dairy and crop farm in the Chehalis valley near Elma. Over the years, they have produced a wide variety of vegetables, grains, and forages, as well as milk. They have four daughters. Three of their daughters and a son-in-law are WSU graduates.