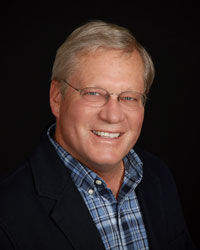 William F. (Frank) Hendrix entered graduate school at Washington State University and received his MS in Animal Science in 1977. In 1989, Frank was hired by WSU Extension and stationed in Yakima County. He brought a research project with him involving an anomaly in Polled Dorset sheep that resulted in extremely heavy muscling. This condition was subsequently determined to be the first on a new gene model: Callipyge, of which he was credited with the discovery of the Callipyge gene and its inheritance.
Current field testing and research includes applied genetics in beef tenderness, and Frank Hendrix has coordinated more than $8 million in grants and awards for research under his supervision. Frank’s service is much too long to mention here. In part, Frank has served on the WSU Dean’s Advisory Committee, was a founding member of the Washington Animal Agriculture Team, led the Yakima County best available Science Committee, and has been a Yakima County Cattlemen Association member and education director. Frank serves the Washington Cattlemen’s Association (member, director and research committee member), has been the WSU/WCA bull sale manager, and manages the Cattlemen’s Producer Library. Frank was a founding member of the Yakima Valley Sheep Producers; Yakima Valley and Eastern Oregon Lamb Pool and Umatilla County Oregon Sheep Producers. On the National scene, Frank was a founding member of the National Polypay Sheep Association. Frank is a graduate of the Washington Agriculture and Forestry Leadership program. He has held every officer position in the Washington Extension Agents and Specialists Association including President in 1994 and Treasurer for over 10 years. He received the National Association of County Agricultural Agents Achievement Award and Distinguished Service Award and five national communication awards for his educational programming. In 2009, Yakima County Cattlemen’s Association honored the Hendrix’s with the Cattle Family of the Year. He holds the State Farmer degree in FFA, and has served on advisory boards in Oregon and Washington and is an honorary Chapter Farmer in both states.