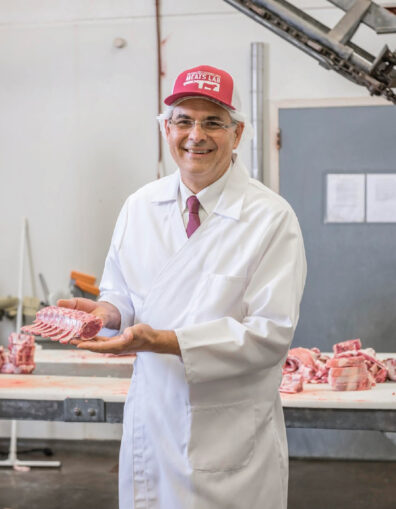 The Department of Animal Sciences is delighted to announce that Dr. John Unruh, Dean, College of Agriculture at California State University, Chico has been named the Distinguished Graduate in Science, Education and Technology for 2021.

Unruh grew up on the family farm and ranch in Warden where they had more than 500 acres of irrigated cropland, sheep, and purebred beef cattle. His experiences on the family operation sparked an interest in biology and animal sciences and a desire for a college education.

Unruh attended Bethel College in North Newton, Kansas, in 1974 where he majored in biology and played varsity football. After transferring to WSU in 1977, he and two other students resurrected the livestock judging team. Unruh also joined the live animal and carcass evaluation team, Alpha Zeta, and Block and Bridle club. He graduated from WSU with a bachelor’s degree in animal sciences in 1979.

“I appreciate and cherish the experiential learning opportunities I had at WSU. I worked at the Meats Lab, sheared sheep, and helped with research projects, among other things,” Unruh said. “But Everett Martin and Duncan Dunn (who was the Meats Lab manager) had the greatest influence.”

Unruh’s career as a meat scientist began during his master’s degree program at WSU when he studied beef carcass composition in Dr. Everett Martin’s lab. He earned his MS degree in 1981 and continued graduate studies examining the effects of various factors on beef quality and composition at Kansas State University, graduating with a PhD in animal sciences and industry in 1984.

In 1985, Unruh returned to Pullman as the State Extension Specialist for Swine Production and Meat Science for three years. During this time, he started the Washington Barrow Futurity, reinitiated Swine Information Day, assisted with the Washington Junior Lamb and Carcass Show and interfaced with producers throughout the state.

In 1988, Dr. Unruh returned to KSU as an assistant professor in Animal Sciences and Industry, was promoted to associate professor in 1994 and professor in 2007. In 2009, he became chair of the Food Science undergraduate program.

While at KSU, Unruh contributed to a strong academic program in animal, meat, and food science. He taught 15 courses to more than 4,700 students, advised over 50 undergraduate students per year, and coached the KSU Collegiate Meat Judging Team from 1989 – 1996, which won two national championships and four reserve national championships. He won numerous professional awards including: Gamma Sigma Delta Outstanding Advising Award, KSU, North American Colleges and Teachers of Agriculture Teaching Fellow, and Distinguished Teaching Award from the American Meat Science Association. In addition, Unruh was the director of the International Meat and Livestock Program at KSU and managed 10 faculty-led study abroad programs.

In 2016, Unruh’s career took an administrative turn after he was hired as Dean of the College of Agriculture at California State University, Chico.

Unruh’s life will soon take another turn back to Pullman when he retires in July. He and his wife, Judy, who is also a WSU graduate, are eager to return to the Pacific Northwest to be closer to family. Both love to garden and enjoy nature and the outdoors. They are especially looking forward hiking Kamiak Butte and to floating the Salmon River in Idaho, where their nephew is an outfitter.