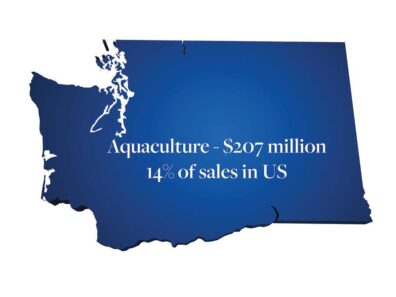 Seventy-three percent of the 156 aquaculture farms in the state were marine aquaculture facilities, covering almost 16,000 acres.

Salmon fish farms have existed in Puget Sound, an inlet of the Pacific Ocean along the northwestern coast of Washington, since the 1980s. However, public concern remains about the potential of fish escapements and other negative effects of non-native fish on indigenous salmon, native fauna, and ecosystems in Puget Sound. This led the Washington State Legislature to enact a law in 2018, phasing out non-native finfish aquaculture in local marine waters by 2022.

In a move to keep marine aquaculture in the state, the Washington Department of Fish and Wildlife and the Department of Ecology revised permits, allowing steelhead farming in former Atlantic salmon net pens in Puget Sound. Steelhead, which are native to the West Coast are an anadromous subspecies of rainbow trout that act like salmon, migrating to the ocean after hatching in freshwater streams and rivers. Because they are a native species, steelhead farming is now allowed in the Puget Sound, but regulations stipulate that farmed fish must only be sterile females to protect the wild fish if a net pen were to fail.

Dr. Michael Phelps and his lab group is working hard to solve a problem critical to the survival of net-pen finfish aquaculture in the state – how to produce sterile fish. Historically, fertilized eggs are exposed to high temperature or pressure, causing them to retain a normally expelled chromosome, creating a sterile triploid with three sets of chromosomes. Unfortunately, this treatment is not 100% effective. Moreover, triploid fish are not as robust as normal fish. Therefore, alternative sterilization methods are needed. The biggest challenge is finding a way to produce hundreds of thousands of sterile fish to meet the demands for commercial aquaculture production.

With funds granted by the Foundation for Food and Agriculture Research, Phelps and his group will attempt to produce thousands of sterile fish from fertile parents. In this unique approach, they will target the dead-end (dnd) gene, which produces a protein that is critical for the migration of primordial germ cells to their site of function in developing gonads. Primordial germ cells are undifferentiated stem cells that eventually become spermatozoa or oocytes. When dnd is modified or eliminated with gene-editing techniques, like CRISPR, the gonads will not have sperm or eggs and the fish will be sterile. Gene editing uses the scissor-like function of CRISPR to snip the dnd gene, rendering it useless.

But how will producers stay in business if all fish are sterile? To overcome this obstacle, Phelps intends to rescue fertility in gene-edited brood stock. To do this, a limited amount of messenger RNA, or mRNA, containing instructions for cells to produce the dnd protein, will be delivered to gene-edited eggs lacking a functional dnd gene. The cells will use the injected mRNA to produce enough protein to allow germ cells to migrate to the correct location in the gonads. After dnd is used up, rescued brood stock develop normally and produce only sterile offspring.

Not only will sterile fish protect wild populations in the event of net-pen failures, but they will also allow fish producers to market larger fish with higher quality meat. North American consumers prefer large fillets, which are 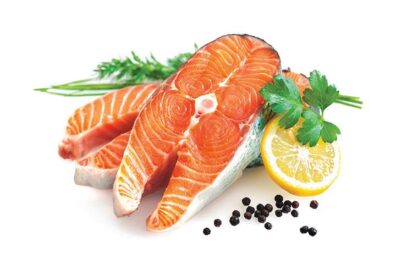 limited by the age at which fish can reach market size. Unfortunately, meat quality peaks before fish reach sexual maturity, forcing farmers to harvest the fish before they have had enough time to grow large enough to meet consumer preference. Therefore, sterile fish produced with Phelps’ innovative method could be harvested at a large age and size.

Phelps is also exploring other methods to help fish farmers grow larger fish. As a graduate student at the University of Rhode Island, he used a genetic engineering technique to produce muscular rainbow trout by inhibiting the activin receptor signaling pathway, which regulates skeletal muscle growth. There are many genes such as myostatin in this pathway. Naturally occurring mutations in myostatin increase muscle mass, also known as double-muscling, in mammals. Unfortunately, it was impossible to determine the functions of the individual genes involved in the pathway because his techniques inhibited the entire pathway in rainbow trout.

Now, with funds from an USDA grant, Jasmine Richman, an MS student in Phelps’ lab is using cutting-edge methods like CRISPR and singlecell sequencing to tease out the individual functions of some of the genes in the same pathway. She is specifically interested in activin A, which appears to be as effective as myostatin at regulating skeletal muscle growth in mammals. Very little is known about the function of the gene in fish. As she investigates if activin A can regulate muscle growth and development in fish, like it does in mammals, the gene edited fish that she has created may exhibit increased muscle growth, which could lead to increased profitability for fish producers and improved consumer satisfaction.

The excitement in Phelps’ lab is palpable. New research studies conducted by the group, which includes post-doctoral researchers, technical staff, and undergraduate and graduate students, will improve the sustainability and profitability of regional, national, and global aquaculture.