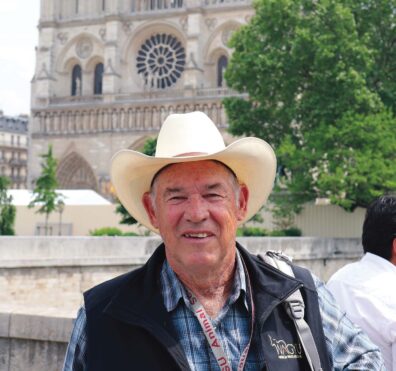 Dr. Jerry Reeves grew up in western Oregon where his family earned their living logging and ranching. He was a faculty member in the Department of Animal Sciences for 37 years and this year we are honored to present him with the Distinguished Service Award.

Reeves received his BS and MS degrees in animal science at Oregon State University and a PhD at the University of Nebraska. He was a postdoctoral fellow at Tulane University School of Medicine where he worked with Nobel laureate Dr. Andrew Schally uncovering the physiological effects of hypothalamic releasing hormones.

Washington State University was fortunate to hire Reeves in 1970 when he joined the faculty of the Department of Animal Sciences. He retired from WSU in 2007 after 37 years of ground-breaking research in animal science, beef and dairy science, endocrinology, reproduction, and immunology. He developed effective and innovative teaching methods and received numerous teaching awards from WSU.

A Major Role in Importation of Wagyu Cattle

In addition to his research and teaching efforts at WSU, Reeves played a large part in initiating the importation of Wagyu, a Japanese breed of cattle renowned for producing highly marbled beef, to the US in the early 1990s. He was part of a team that went to Japan in the late 1980s to cultivate an export market for US beef to Japan. The team realized that the popular beef cattle breeds in the US could not produce the quality of beef that the Japanese consumer desired and therefore redirected their focus to importing the Wagyu genetics to the US. Reeves’ team provided US producers with recommendations and strategies to use Wagyu genetics for crossbreeding with commercial cattle to improve beef marbling.

Reeves remains dedicated to the Wagyu breed and is presently the oldest active member of the American Wagyu Association, registering his first Wagyu calf in 1990. He served two terms on the AWA Board of Directors in both the 1990s and the 2000s. He and his wife, Heidi, own and operate Bar R Cattle Company outside of Colfax, Washington. They are committed to advancing the breed and were named producer of the year by the AWA in 2008.

Although retired, Reeves maintains a relationship with the department and WSU. He donates Wagyu semen to the WSU Beef Center, helps teach class occasionally, and supports the research of current department faculty members by donating samples and performance data from his cattle. Reeves assists in training the next generation of ranchers and farmers by employing college students who help with the everyday operations of his working cattle ranch, supports the Cougar Cattle Feeders through steer donations, and is a patron of the steer carcass contest at the Palouse Empire Fair in Whitman County. Furthermore, Reeves has served on department and university committees – the most recent one being the search for a new Animal Sciences department chair.

Over the years, Dr. Jerry Reeves has been an asset to the Department of Animal Sciences, WSU, scientists, youth, and cattle producers in the Pacific Northwest and the United States. Congratulations to the 2022 Distinguished Service Awardee.