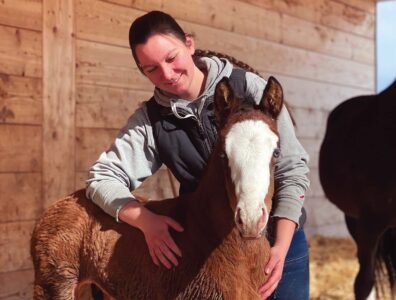 Landing a coveted internship usually takes more effort than just showing up for an interview. Kayleigh Moore figured that a “squeaky wheel gets the grease” and sent a follow-up email to Tamarack Ranch after her interview. She really wanted to participate in the internship at the prestigious reining horse training facility in Joseph, Oregon. Moore’s extra “squeakiness” proved to the ranch managers that she was truly interested and dedicated to the program and led to an official offer, which she enthusiastically accepted.

Moore, a junior animal sciences student from Lakebay, Washington has always loved horses and has been riding since she was nine years old. Because she wants to be an equine veterinarian and someday serve clients like Tamarack Ranch, she knew she needed the “real world” equine industry experience that an internship would provide.

During her internship from December 2020 to April 2021, Moore was immersed in many aspects of horse management and foaling at the Tamarack Ranch. She learned the benefits of rotational grazing for maximizing pasture use and nutrient availability as she moved mares around the ranch’s pastures and into the barn as their foaling dates approached. Most importantly, Moore learned how to recognize the classic signs of a mare’s readiness to foal – relaxation around the tailhead, rump, and vulva, accumulation of dried secretions on the tips of the teats, a process known as waxing, and behavioral changes. In addition to these visual signs of foaling, Moore explained that the Tamarack Ranch uses the Foalalert monitoring system in which a biometric transmitter on the mare alerts caretakers through a receiver that foaling has begun. This ensures that each birth is attended at Tamarack.

“I lived in the barn and had to be available 24/7 when a mare was ready to foal so I could go in the stall to make sure both were okay. Every time the Foalalert went off, I lept out of bed shaking with adrenaline. Then I would wait until the foal was born. My role when attending a mare foaling was to ensure the placenta did not hinder the foal’s breathing by clearing its nostrils and following up to ensure the foal had passed the meconium,” she said.

She will apply to the WSU veterinary program in 2023. In the meantime, she is eagerly awaiting the arrival of a new foal this June. Her mare Velvet, an American Quarter Horse, was bred to an Andalusian stallion. Moore aspires to compete in western dressage and mounted archery events with both horses. 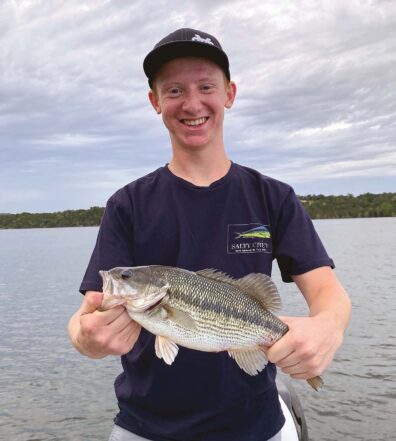 When your mom, aunt, and uncle are WSU alumni, it’s hard to not become a Coug! Although Joseph Koenig, a sophomore undergraduate student from Tulare, California, toured other universities, he ultimately chose to enroll at WSU and major in animal sciences.

“I’ve been to football games in Pullman with my aunt and uncle before. Pullman felt like home,” he said. “I like the small-town environment here.”

Surrounded by large dairies, Koenig grew up on a small farm in Tulare County where he raised and showed beef steers in FFA. He spent long hours with his dad, a veterinarian, learning about the trade. He also shadowed several other large-animal veterinarians and because of all these experiences, Koenig decided that he also wants a career in the veterinary profession. He aims to work in a mixed-animal practice somewhere in the Northwest.

Although his freshman year of classes was all online because of COVID-19 restrictions, Koenig managed to connect with Dr. Mike Phelps, department aquatic molecular physiologist and got some research experience in his lab. He became skilled at extracting DNA from zebrafish fin clips, performed microinjections in fish eggs and learned how CRISPR technology is a powerful tool used to edit genes. In this work, Koenig edited genes to create a new line of fish for use in new projects in the Phelps lab.

Wanting to branch out and continue his drive to learn and experience new things, Koenig participated in a five-week internship program last summer at Four Rivers Kennels in rural Missouri. The kennel is an independent, USDA-approved facility that investigates canine nutrition and performance for the pet food industry. During the hot and humid summer and sometimes amid some awesome thunderstorms, he leash-trained puppies, walked dogs, cleaned kennels, and taught dogs how to retrieve. He also helped with metabolic studies in which the researchers fed the dogs a small portion of a special diet and measured oxygen consumption and carbon dioxide production after the dogs ate the food. The collected data was then used to estimate the dog’s metabolic rates. In addition, Koenig drew blood samples from the dogs and performed complete blood counts and blood chemistry panels.

“I had a good time and learned a lot,” he said. “The kennels are on beautiful property.”

In his free time, Koenig likes to fish and travel. He and his family have visited Costa Rica, Ecuador, the Galapagos Islands, Kenya, Switzerland, Germany, Austria, Spain, and Italy. He also enjoys participating in intramural sports and tries to get in a round of golf when he can. He is involved in the Newman Center at the St. Thomas More Catholic Church on College Hill in Pullman and hopes to go on a mission someday. He will apply to the WSU College of Veterinary Medicine in 2023. 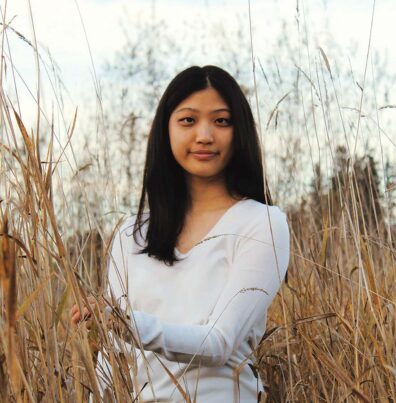 Tragedy inevitably changes lives as Jiwon Ha, a freshman undergraduate student majoring in animal sciences, learned when Lulu, her Golden Retriever died in her arms after getting hit by a car. As a child, Ha had toyed with the thought of studying to become a veterinarian. The heartbreak of her furball friend’s death not only left her feeling helpless but it also sparked a change in her soul and increased her desire to become a veterinarian, to make a difference in animal’s and human’s lives.

Ha was born in Seoul, Korea and moved to the United States with her mother when she was eight. After moving around Western Washington for a little while, they finally settled in Gig Harbor near her mother’s family. She excelled in high school and now has a laser-like focus on becoming a veterinarian.

Because WSU has a veterinary school, it was the obvious choice for Ha’s undergraduate education. She thought she would major in biology, but her experiences in Alive introduced her to the animal science program.

“I didn’t know anything about animal science or that there was a major in this field,” Ha said. “Choosing this field as a major was a good decision because I not only get hands-on experience but I also add more tools to my toolbox that will help me reach my goal of becoming a capable veterinarian.”

During her first semester at WSU Ha took Introduction to Animal Sciences taught by Dr. Martin Maquivar. She had little to no experience with large animals, so one day after class, she approached him and asked if there were any opportunities where she could get involved and get hands-on experience handling ruminants. He invited her to join his ruminant reproduction research group and Ha has had a wonderful time learning things she never dreamed of.

“As a freshman, I wasn’t expecting to learn how to take blood samples, palpate female cows for pregnancy, or vaccinate ewes,” she said. “Literally and figuratively getting my hands dirty reassured me about my choice to work in this field. Here is where I truly belong, and I hope to continue my work as a pre-vet student and engage in more diverse activities.”

Ha is a member of the Honors College and is throwing around the idea of applying for the Honors Pre-Admit Program in Veterinary Medicine, which would grant her early admission to the WSU veterinary school. However, in the Animal Sciences Orientation class taught by Dr. Kristen Johnson last fall, Ha learned about the opportunity to study veterinary medicine at the University of Glasgow in Scotland. She is considering both options and has yet to decide.