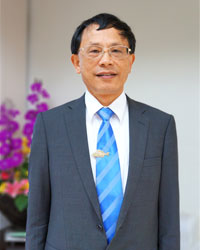 Ching-Fong Chang graduated from WSU in 1982 with a M.S. [Dr. V.L. Es­tergreen, mentor] and in 1986 with a Ph.D. degree [Dr. J.J. Reeves as mentor]. While at WSU, Ching-Fong was well-liked by fac­ulty/staff/students and there was a universal sense of sorrow when we said goodbye to him as he left to begin his academic career.

Ching-Fong’s research group pioneered en­docrinology and reproduction research in coral–which showed that a specific GnRH, numerous sex steroids, and aromatase ac­tivity existed in the coral and ( over time) elucidated the potential roles of these en­docrine factors in coral reproduction. He further conducted experiments into the mechanism(s) of germ cell development in coral, which resulted in the identification of coral “vasa” gene and mechanisms to in­duce the activity of the gene. He found the origin of coral early germ cells and was able to demonstrate vitellogenesis during germ cell development. Collectively, this research is very important to the restoration of coral reefs during this period of global climate change.

In part, for these reasons Dr. Ching-Fong Chang has been selected to receive the Department of Animal Sciences 2014 Out­standing Alumnus Award.