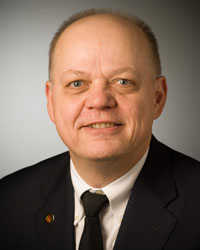 Dr. Mark Varner was raised on a dairy farm in Minnesota. He received his B.S. degree with Distinction in Animal Sciences from the University of Minnesota in 1975. Mark received his M.S. degree in Animal Sciences from Washington State University in 1977 under the direction of Dr. Jerry Reeves. Mark received his Ph.D. degree in physiology from North Carolina State University. He joined the faculty at the University of Maryland in 1981 as an Assistant Professor and Extension Dairy Scientist, and remained at Maryland until retiring late in 2011. Mark was promoted to Associate Professor in 1988 and to Full Professor of Animal &amp; Avian Sciences in 1997. Mark taught all, or part, of five classes on campus and conducted research in reproductive management and lameness of dairy cattle. He maintained an active Extension program providing dairy-related information via the Internet. He is co-creator of Dairy-L, the first and most successful Internet network of experts in agriculture. Mark is the author or co-author of over 100 journal articles, book chapters, abstracts for professional meetings, proceedings chapters and newsletter/popular press articles. Mark has served as PI or Co-PI on more than $1.2 million in grants and contracts. With a team of engineers and a veterinarian, Mark developed a walk-through device to automatically detect lameness in dairy cows. After receiving a US patent on this device, the team licensed the device to BouMatic, Inc. of Madison, WI. The device is currently marketed nationally and internationally as StepMetrix. Mark has received awards and acknowledgements of his contributions from international organizations, professional peers, the University of Maryland, students, alumni and Extension client groups. Currently, Mark is Senior Counselor for International Programs with the Association of Public and Land-grant Universities in Washington, DC, and WSU is a member of this association.