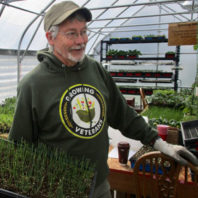 Michael Hackett earned his Master’s degree in Animal Sciences at WSU in 1976. His area of specialization was production and management with Dr. Joe Hillers serving as his advisor.

For over 25 years, Mike served as an agriculture development faculty member with WSU Extension, based in northwest Washington. In this role, he served 2,000 family farms and 1,500 4-H youth members. Mike identified a need for education within the small farms community so he developed the Extension Livestock Advisor program, which is still active. This program trained over 800 volunteers to provide advice for thousands of small-scale farmers in Washington.

Mike’s devotion to agriculture expands beyond the state.  He was actively engaged in exchange programs across the world, including Russia, Indonesia, and Kazakhstan. He also participated in WSU International Programs and the USAID Farmer-to-Farmer Program.

Prior to joining the WSU family in 1974, Mike served our country in the United States Navy. He was called-up for the military draft in 1967, during the height of the Vietnam War. He was assigned to the Amphibious “Brown Water Navy”, supporting combat operations along the Saigon River near the Mekong Delta. He was in and out of Vietnam for 14 months in 1968 and 1970. This experience led him to his current role as a staff farm mentor for an organization called Growing Veterans. Through this organization, Mike serves as a mentor and life coach for combat veterans. Many of these veterans suffer the effects of PTSD and TBI injuries, in which Growing Veterans provides emotional support and camaraderie through farming and ranching. Mike calls it ‘dirt therapy’, and it works! Mike has volunteered with Growing Veterans for five years and enjoys teaching veterans sustainable agriculture practices.

Mr. Michael Hackett’s career has been about service. Service to agriculture and service to humanity. For these reasons, we are proud to award him the 2018 Outstanding Alumnus Award.