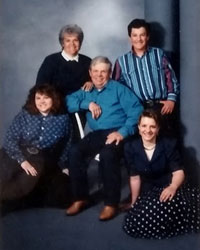 The Ralph E. Petty Family has been a strong supporter of WSU and the Department of Animal Sciences for many years.

Ralph Petty grew up on a ranch in Asotin, WA that his family homesteaded in 1878. When the Columbia Irrigation Project lottery selected his family for three shares, Ralph decided not to attend WSU so his father and brothers could accept the shares. Instead, he continued to raise purebred Hereford cattle and wheat on the family farm.

He was incredibly proud of his wife Pat and his children (Jody, Amy, and Bruce) and all of their successes. His devotion to animal agriculture was undoubtedly a large part of the reason that his daughter, Jody chose to be an Animal Sciences major at WSU. When she graduated from WSU in Animal Sciences and was named outstanding senior he was especially impressed with the education and support she received from the department.

When Ralph died in 1995, his family chose to honor him and has supported the Ralph E Petty Family Outstanding Senior in Animal Sciences Award for the past 20 years. It is a highlight of our year when Pat Petty and Jody (Petty) Forgey attend our award functions, to present this award. The Department of Animal Sciences is grateful for the Ralph E Petty Award and the long term support and friendship of the Petty Family.