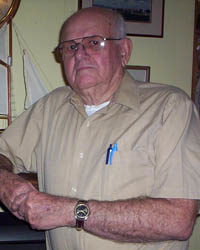 Scott Hodgson obtained his B.S. degree in Dairy Husbandry in 1950 from Washington State University (WSU). His first official position was as a Junior Dairy Scientist, attached to the WSU Agriculture and Extension Service. In 1951, Scott was transferred to the Western Washington Research and Experiment Station (WWREC in Puyallup) as the Dairy Herdsman. For a total of 39 years, Scott served the dairy industry in Washington State, eventually reaching the rank of Associate in Animal Science (Research). Scott’s scientific contributions included a variety of scientific publications (18); extension publications, bulletins and technical reports (23); and popular articles (50). Scott’s main successes, however, were as a people person. For his entire career span, Scott worked with the Washington State 4-H dairy program. Whether it is a judging school, or dairy leaders training program, Scott was a focused and respected representative of this department. For his efforts, Scott was inducted into the Washington State 4-H Hall of Fame in 2001, was honored by the Washington FFA as a State Farmer (1969), and was named an associate (lifetime) member of Farmhouse Fraternity. Scott also worked with dairy producers, serving as the secretary of the Washington Purebred Dairy Cattle Association, as a Director or President of the Pierce County DHIA Association, and either as a Director or as President of the Washington State Holstein Association. Scott’s expertise with dairy cattle was demonstrated through the frequent request for him to be a judge at dairy cattle shows throughout the Western United States, and for 35 years Scott served as the Dairy Cattle Superintendent of the Western Washington Fair. Closer to the Department, Scott served on the CUDS Dairy Advisory Committee for fourteen years (1979-1993), and has received the Henry A. Dykstra Outstanding Dairy Alumni Award. Scott Hodgson is a Life Member of the American Dairy Science Association and the Dairy Shrine Club. On a personal side, Scott Hodgson served the United States as a brown-water Navy man, on a Landing Craft Infantry-Gun boat, during World War II, where he received numerous medals, commendations, and a Presidential Unit Citation for meritorious service. His Navy job was to cover the landing of combat troops when they went ashore. Naval service took Scott to the landings on Kwajalein and Eniwetok in the Marshall Islands, the operations in the Philippine Islands (3 separate landings), at Guam and finally at Okinawa. He later served on the USS John W. Thomason (a destroyer) before being discharged in January 1946. Scott has been an Elder for the Puyallup First Presbyterian Church. Scott and his spouse Pat are the parents of six children (4 boys and 2 girls). Unfortunately only five survive as his eldest daughter, Laurie Anne (Hodgson) Olson passed away in June 2006. Scott and Pat have 8 grandchildren and six great-grandchildren.