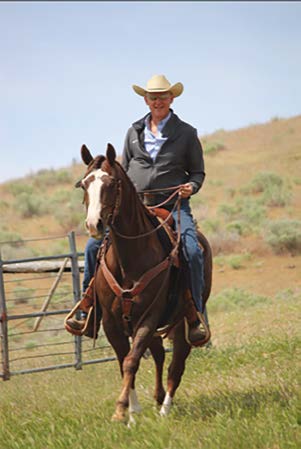 Each year, the Department of Animal Sciences seeks to honor an alumnus who has been successful in his or her career, has actively served the public, and has contributed substantially to the livestock industry. We are pleased to announce that Dr. Shannon Neibergs has been selected as the 2022 Outstanding Alumnus.

Neibergs graduated from WSU in 1983 with a BS in Animal Sciences. As an undergraduate student, the Pullman native was a member of the Rodeo Team and met his future wife, Holly (née Schmidt), at Hilltop Stables, the university’s former equine facility.

After graduating from WSU, Neibergs worked as a cowboy at the Tee Bar Ranch Company in Augusta, Montana. Although he enjoyed the work, he realized he did not want to be a cowboy forever and because of his interest in the economics of livestock production and management, returned to WSU as a graduate student in agricultural economics. After earning an MA in 1987, he moved to College Station, Texas where he completed his PhD in agricultural economics and graduated from Texas A&M University in 1993.

For the next two years following his formal university education, Neibergs was a postdoctoral research associate at Iowa State University’s Center for Agricultural and Rural Development. His professional career formally began in 1995 as an assistant professor in the Equine Industry Program at the University of Louisville in Kentucky. He believes his experiences with the WSU Rodeo Team and the time spent at Hilltop Stables setup his success at the UofL where he was the Faculty Member of Year in the Equine Industry Program in 1997. Other honors recognizing his outstanding performance and service at the UofL include a Research Award Bonus in 1998, Exceptionally Meritorious Annual Evaluation in 1999, Outstanding Service Award Bonus in 2001, and Meritorious Service Evaluation in 2003.

Neibergs returned to Pullman in 2006 as the Associate Professor Extension Livestock Specialist in the WSU School of Economic Sciences and was promoted to professor in 2018. He currently also serves as Director of the Western Center for Risk Management Education, which provides risk management education for farmers and ranchers to help improve the economic sustainability of their operations.

To date, Neibergs has had a productive career at WSU. Since 2006, he has been the primary or co-investigator of at least 40 grants and awards that garnered about $30 million of extramural support and contributed to more than 25 publications in peer-reviewed journals. Some of his research contributions include investigating the economic contributions of Washington’s beef and dairy industries, climate change effects on agriculture in the Pacific Northwest, nutrient recovery systems to mitigate air and water pollution by livestock operations, and genomic selection to reduce economic risk of dairy production.

To unwind, Neibergs’ leisure time is spent with the family’s horses and horseback riding. In the past, he participated in ranch horse versatility competitions. Now he is a member of the Clearwater Cutting Horse Club in Deary, Idaho and competes in cutting horse competitions at the amateur level.