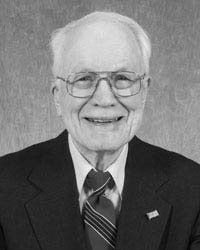 Dr. Estergreen (Line’) obtained his BS degree in 1950 from Washington State College (WSC), after which he served one year as assistant dairy herdsman in Dairy Science. He returned to WSC and obtained his teaching credentials and was a Vo-Ag instructor for two years. In 1956, Line’ received his MS degree in Dairy Science at WSC and he was awarded his Ph.D. degree from University of Illinois in 1960 in the area of reproductive physiology. During 1960 to 1961 he held a post-doctoral position in steroid biochemistry at the University of Utah. In 1961 Line’ returned to Washington state University (WSU) as a Research Associate in Dairy Science. In 1962, Line’ joined the faculty of Animal Sciences, WSU, where he rose to become a full-professor in 1972. Line’s basic research area was in the regulation of pregnancy, as affected by the progestins and estrogens. Line’ brought distinction to the Animal Science Department at WSU by teaching and counseling many undergraduate and graduate students, and teaching and training 12 graduate students who went on to become successful in university research and teaching or in private enterprises. His mentoring and guidance garnered him the respect and love of his students. Some of these students, including Dr. Terry Nett [1998 Distinguished Graduate, Science, Education & Technology], Dr. C.V. Rao [2009 Outstanding Alumnus] and Dr. Gary Moss [2011 Distinguished Graduate, Science, Education & Technology] have received recognition from the department, and Dr. Kyle Frandle has been recognized by the WSU College of Veterinary Medicine [1999 Distinguished Veterinary Alumnus Award (Practice)]. While at WSU, Line served the department in a variety of ways. He taught lactation physiology, endocrine physiology, and performed numerous dairy extension functions. Since his retirement, Line’ has supported the V. Line’ and Ellene Estergreen Scholarship for Animal Sciences students. As an outstanding alumnus himself, Line’ has greatly contributed to the alumni pool of the Animal Science Department at WSU.